This blog has shattered all expectations.

DARK TRIAD MAN®  launched on October 27th, 2015. I had no readers, zero traffic, the niche market was saturated and I was clueless how to kick off a blog and turn it into a vehicle with real traction and superb value.

I started absolutely from scratch.

43,000 visitors, 110,000 pages and over 5 million Twitter impressions later, that scratch is a roaring gorge opened up into the world of writing that delivers challenging information to readers across the world.

Now I’m going to share how it happened  in the six first awesome months.

DARK TRIAD MAN® was up barely two months before the first committed troll appeared. Needless to say, it was an unusual experience the first time out of the gate. New bloggers must quickly learn to roll with the punches:

Then there were the odd demands for physical violence that occasionally streamed in, such as this one from an Alaskan bicyclist that wanted a personal phone call placed from me to him to argue. (What? No, my time is more valuable than that.)

Some of the articles were apparently triggering to certain readers.

One of the longest (7,490 words) and most popular articles at DARK TRIAD MAN® was picked up on Facebook and made the rounds there, causing inflamed response from certain quarters after it was described as instructions on “how to groom women for abuse”.

(Do people really believe that nonsense? Yes. Yes, they do, Virginia.)

But the Internet is like that, and so are human beings in the dark world.

There is a lesson there for those who are opening up the doors to their inner mindset and putting their deeply personal content out there for the world. You will make enemies, even those who are nothing more than groveling, fetid wretches with little significance or meaning in their lives beyond trolling on the Internet.

Don’t pause for argument. Profitable engagement is the purpose of determined encounters.

Many thanks to those who provide the amusement of what Victor Pride calls #BadGuyFanMail.

Let us now examine results for the six first awesome months at DARK TRIAD MAN®. I make some bold claims about traffic and reach in this post. I’m going to demonstrate them to you.

The first one is Twitter. It has been integral to the growth of my work.

Join well over 2,100 followers who are a part of the enormously high engagement on this critical social media platform.

I will tell you right now that some of the most gravely competent human beings out there in the dark world are on Twitter. With a click you’re able to access what amounts to a live stream of consciousness and growth from them. Minute by minute.

It’s not all hashtags and silly pronouncements. Learn to read between the lines, and learn to read well. Profit from it.

Now let’s look at the immediate statistics underneath my traffic. Two screencuts are added in, since Twitter Analytics limits your simple search to a 91 day period. As you can see, it’s actually 5.2 million impressions. And not counting the very first day of launch:

Now that we’ve covered Twitter, let us turn to the meat and milk of any blog: traffic.

DARK TRIAD MAN® has crashed through my expectations for a brand new blog, but in a very important way: sustained growth.

A viral spike is great fun. I’ve had a few small ones, usually when an unexpected and influential share on Facebook makes the rounds, or an individual with a high follower count likes an article and retweets it.

But they are not dependable, rarely predictable, and they always subside.

Solid, unrelenting, and determined growth is the sustained target.

The very first target of any new blog is acquiring readers. There is an overwhelming amount of advice and recommendations out there for entrants to the writing scene.

DARK TRIAD MAN® has one overriding rule for acquiring readers and delivering content.

This rule is not followed by all writers, especially those who are seeking a fast buck or to proselytize click bait. I adhere to it adamantly.

It is the heart of everything I do here.

Authentic content is critical for several reasons. The first reason is that I loathe and despise having my time wasted. Writing and publishing trivial, silly content is in complete opposition to the very serious purpose of this site.

The second is that I refuse to waste the time of other people.

If you are here, you are reading value.

Twitter can be a place to banter and laugh and trade trash talk from time to time. And that is fine. I am not humorless, and the smile of the psychopath is a genuine thing to play with.

But make no mistake: DARK TRIAD MAN® is here for a serious, crucial and single-minded purpose.

I write to teach my brothers. I share knowledge in order to raise a hot flickering torch in the dark world, and within its light provide men with hard lessons and brutal truths they can grasp, and train with, and overcome.

My purpose is to give them the tools and teaching to transform them from a stymied innocent into a practitioner, and then spur them onwards into scholarship and committed mastery of life and death – and the sacred place in between.

As I write this post I watch the numbers climb:

Those of you who have been reading Dark Triad Man since late last October will recall the lead up to release of The Nine Laws, an original ebook offered to the first 1,000 subscribers. That mark was reached early this month.

Reader feedback has been overwhelmingly positive, and the demand for a print edition is incessant. After much thought, the decision was made to transform it from a concise and simple ebook into a full length, expanded print edition with a very serious training component.

The second of three focus groups has just commenced reviewing plans for the expanded content. I’m reviewing their feedback daily, and the structure of the book is taking fearsomely effective shape.

I am going to make a commitment to you:

The Nine Laws expanded edition will be the most powerful book of the year.

That is my grave and irrevocable commitment to you.

But that is not all that must be communicated here.

There is one more thing to say.

These six first awesome months are because of you.

This post is a celebration, in many ways, of the incredible results and connection that are taking place across social media. Through the written word and now podcast, my voice is reaching you faster and deeper than I had dared expect.

It has been an absolute honor to connect with so many scores of thousands of people reading DARK TRIAD MAN®.

The impact of my writing and words that you share so candidly with me, are severe and fundamental drivers of determination.

Screaming with useless futility into the dark world is the work of fools.

Delivering brutal truth to the scattered legions of my brothers and hearing their roaring response is the true work of a lifetime. Knowing that men teach their sons, that they are leaving behind illusion, is a source of power.

Reading how they rise to the defense of the West as grim and exultant brothers is the reward for unlocking over forty years of training and survival in the dark world, and passing on this knowledge to you.

I am very proud of the work we are doing here.

Most of all, I am proud that the spirit of the West is not dead.

I am see you, brothers, and I honor your lifted steel.

Listen to the words I speak to you.

Walk this path with me through the dark world.

The coming release of The Nine Laws will expand your knowledge, your training and your unblinking, limitless ferocity in pursuit of power. You will require it in the days ahead.

For the West needs us, and the hour grows dark and bloody.

Throne shake and crowns fall, to be seized with iron hands.

It is time to charge. 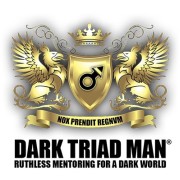 Customer service, platform management, product support and vendor oversight for Dark Triad Man, LLC. You can reach us at [email protected] with any questions, comments or concerns.

This is your living manual of power to bring fierce light to your inner world. It will ensure that you discover what you’re capable of, as a man who sees reality without fear.
THE NINE LAWS

Spread the word and make a statement with our bold line of shirts from Crypto Fashion.
Even Antifa can't scream loud enough for
mercy from Ivan Throne.
OFFICIAL GEAR

An explosive gathering of men who drive into the heart of sacred purpose in the dark world. Master the male burden of performace in a venue of unparalleled luxury.
THE IMMERSION FORGE

DARK TRIAD MAN®
recommends the following resources as fundamentally important to the development of a man who delivers and seizes value in the markets of the world.


INFOGALACTIC
The Planetary Knowledge Core is an objective and fast rising displacer of Wikipedia that comes straight from the Alt-Tech movement as a new premier information source.


VOX POPOLI
The site of the Supreme Dark Lord is where you will find the inside track to the Alt-Right, the Alt-Tech and direct access to some of the sharpest minds available in the new age.


MEN OF THE WEST
The Men Of The West celebrate, defend, and expand Western Civilization and the values and traditions that created it. There is no substitute for victory. They are the Hard Right.


THE FAMILY ALPHA
Manhood means responsibility for, protection of and furtherance for the family. Hunter is a guest poster here at DARK TRIAD MAN®. Read his writing on marriage and masculinity.

You don't need another day of pain. You just need a roadmap out of crazy. Open up this vital manual today and get started building a new life without apology or abuse.
THE ESCAPE PLAN

Get news and details
of speaking events
with Ivan Throne at
DARK TRIAD MAN®.